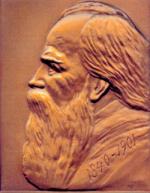 The Imperial St. Petersburg Society of Naturalists founded in 1868 under St. Petersburg University, established in the 1910s an international award in the name of Alexander Onufrievich Kowalevsky, the great Russian embryologist, one of the founders of comparative developmental embryology, a graduate and later a professor of St. Petersburg University. The award consisted of a medal and a monetary prize of 250 roubles. The plaque medal was created by P. G. Stadnitsky. The front face of the medal portrayed A. O. Kowalevsky, the reverse side displayed the sea-bed with various kinds of invertebrates which Kowalevsky studied. The medal was awarded for research in comparative anatomy and embryology of animals. Manufacturing of medals and creation of the award fund was somewhat delayed. Thus the award was never given. The Fisrt World War broke out in 1914, then the February and October revolutions of 1917 took place, the civil war that lasted for many years which led to the devastation of the country. All these disasters that Russia endured made the decision of SPbSN on the international award untimely, and the award sank into oblivion for a long time.

Kowalevsky medal The idea of the Kowalevsky medal emerged again in 2000. The medal was found in the numismatic collection of the State Hermitage. It turned out that the medal was manufactured at the St. Petersburg Mint and that the Mint Museum still had the moulds for plaque casting. Unfortunately, the upper edge of the mould with the signature of A. O. Kowalevsky was damaged and had to be removed. Nevertheless, the medal was restored by efforts of the Mint

In March 2001, the SPbSN Academic Council reinstated the international award of the Society in commemoration of the 100th anniversary of A. O. Kowalevsky's death. Since 2001, the medal has been regularly awarded for distinguished achievements in comparative zoology and embryology to researchers who made significant contribution to modern ideas on phylogeny of animals, and developmental biology. The Medal Award Regulations specify that the medal in commemoration of Professor A. O. Kowalevsky "should be awarded for applying modern approaches in embryology and evolution studies".

In March 2001, the SPbSN Academic Council reinstated the international award of the Society in commemoration of the 100th anniversary of A. O. Kowalevsky's death. Since 2001, the medal has been regularly awarded for distinguished achievements in comparative zoology and embryology to researchers who made significant contribution to modern ideas on phylogeny of animals, and developmental biology. The Medal Award Regulations specify that the medal in commemoration of Professor A. O. Kowalevsky should be awarded for applying modern approaches in embryology and evolution studies.

In the year of the medal reinstatement, the award was given to several distinguished researchers of the 20th century whose works made great contribution to comparative evolutionary morphology and embryology. The award procedure stipulated a large international nomination. To hold the nomination, an International Committee was elected which consisted of well-known American, German, Spanish, Danish, Canadian and Russian scientists.

Kowalevsky medalIn 2001 medal was awarded to Donald Thomas Anderson (Australia), the world-recognised authority in comparative anatomy and embryology; Gary Freeman (USA), a recognised leader in research of embryological grounds of animal evolution; Brian Hall (Canada), who made a great contribution to the modern synthesis of embryology and evolution; Olga Mikhailovna Ivanova-Kazas, Professor of St. Petersburg State University (Russia), a distinguished representative of the St. Petersburg embryological school, the author of well-known monographs and manuals on comparative and developmental embryology; Klaus Nielsen (Denmark), who made an inestimable contribution to the development of comparative morphology and phylogeny of multi-celled organisms; Rudolf Raff (USA), the author of several books on embryology and evolution, fruitfully combining modern molecular biology approaches with comparative anatomy and phylogeny; Rupert Riedl (Austria), Honorary Professor of Vienna University, known not only for his research in marine zoology, but for his great contribution to the theoretical development of comparative morphology; Klaus Sander (Germany), Honorary Professor of Freiburg University, known for his brilliant works in descriptive and experimental embryology of insects.

Since 2002, only one medal has been awarded annually. In 2002, Eric Davidson, Professor of California Institute of Technology and member of the United States National Academy of Sciences, got the highest rating and was awarded the medal. Eric Davidson is one of the most outstanding modern molecular biologists successfully working in developmental genetics. He is the author of an ingenious theory on the origin of bilateral animals. The theory is based on recognition of the leading role of the evolution of genome regulatory systems. In 2003, according to the recommendation of the International Committee, the Kovalevsky Medal was awarded to Walter Gehring (Switzeland), Professor and distinguished molecular developmental biologist, whose works on genetic systems that control embryonic development showed that invertebrates and vertebrates have identical control systems. In 2004 the SPbSN Academic Council, considering the results of the international nomination, unanimously decided on awarding the Alexandr Kowalevsky Medal to Scott Gilbert, USA, Professor of Swarthmore College, Honorary Member of SPbSN. Scott Gilbert is known in the scientific community not only for his ingenious works in comparative embryology of turtles, but also for his deep theoretical research in evolutionary and ecological developmental biology, which showed the importance and future prospects of these new trends in biology. His "Developmental Biology", the world-famous textbook which ran into eight editions is a true encyclopedia of modern embryology. Nori Satoh Professor of Department of Zoology, Kyoto University, Japan, was the winner of the 2005 of the Kowalevsky Medal. Nori Satoh is now recognized as the founding father of the study of ascidian developmental biology at the molecular level, and remains even to this day one of the acknowledged leaders in this field. Even now, he continues to work to open up new perspectives on evolutionary developmental genomics, through studies of his favorite animals, the ascidians. Professor of Oxford University (UK) Peter Holland, who for nearly 20 years has argued that the evolution of animal diversity can be understood by considering both the phylogenetic distribution of homeobox and other developmentally important genes and their association with genetic diversity and morphological variability, has won the 2006 Alexander Kowalevsky Medal. Professor Michael Akam, Director, University Museum of Zoology of Cambridge one of the founders of modern evolutionary developmental biology, has won the 2007 Alexander Kowalevsky Medal. This prize recognizes outstanding contributions to the field of evolutionary developmental biology. The winner of 2008 was Sean B. Carroll is an award-winning scientist, author, and educator. He is currently Professor of Molecular Biology and Genetics and an Investigator with the Howard Hughes Medical Institute at the University of Wisconsin USA. His research has centered on the genes that control animal body patterns and play major roles in the evolution of animal diversity. Mark Q. Martindale, director of the Kewalo Marine Laboratory and Professor in the Pacific Biosciences Research Center (PBRC) at the University of Hawai'i at Manoa (USA), has been awarded the Alexander Kowalevsky Medal in 2009 for his contributions to the field of evolutionary developmental biology. Dr. Martindale is one of the world's foremost comparative embryologists and a leader in the field of evolutionary developmental biology. Dr. Martindale has used evolution as an integrating principle for his empirical studies of the cellular and molecular aspects of development of a wide range of animals from diverse taxa, mostly marine species. It should be mentioned that the reinstatement of the international award of the St. Petersburg Society of Naturalists, the Alexander Kowalevsky Medal, was warmly welcomed by the scientific community. In January 2003, the Symposium of Alexander Kowalevsky Medal winners were held with great success in Toronto as a part of the annual Congress of the Society for Integrative and Comparative Biology.